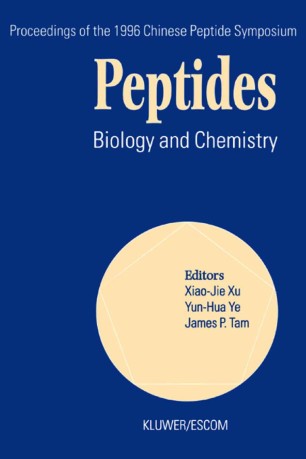 The fourth Chinese Peptide Symposium, hosted by Peking University, was held at Chengdu, China on July 21 25, 1996 with 164 participants, including 45 scientists from abroad, representing 12 countries. The four day conference was both intense and spiritually rewarding. Our goal for CPS 96 was to provide a forum for the exchange of knowledge, cooperation and friendship between the international and Chinese scientific communities, and we believe this goal was met. The symposium consisted of 10 sessions with 55 oral and 78 poster presentations, including synthetic methods, molecular diversity and peptide libraries, structure and conformation of peptides and proteins, bioactive peptides, peptide immunology, De Novo design and synthesis of proteins and peptides, ligand receptor interactions, the chemistry biology interface and challenging problems in peptides. Theenthusiasticcooperationandexcellentcontributionsweregratifying andtheactive response of the invited speakers contributed to the success of the symposium. The presentations were of excellent caliber and represented the most current and significant aspects of peptide science. Dr. James P. Tam and Dr. Jie Cheng Xu were the recipients of ‘The Cathay Award’ sponsored by the H. H. Liu Education Foundation, offered for their seminal contributions in peptide science and the Chinese Peptide Symposium. Four outstanding young scientists were selected by the organizing committee to receive awards sponsored by Haikou Nanhai Pharmaceutical Industry Co. Ltd. (Zhong He Group).