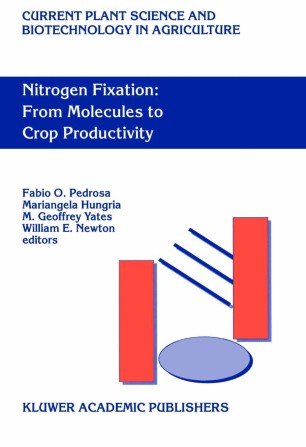 The 12th International Congress on Nitrogen Fixation was held in Foz do Iguaçu, Paraná State, Brazil, from the 12th to 17th of September, 1999. This volume constitutes the proceedings of this Congress and represents a compilation of the presentations by scientists from 38 countries who came to discuss the progress made, to exchange views and to collaborate. Since the first meeting in Pullman, Washington, USA, in 1974, this series of Congresses has been held three times in the United States, four times in Western Europe, in Australia, Mexico and Russia, and now for the first time in South America. Brazil was a most appropriate choice because Brazilian agriculture is especially dependent on biological nitrogenfixation. An important example is the soybean crop. The 30 million metric tons of grain produced each year relies solely on symbiotic nitrogen fixation. N-fertilizers are expensive in Brazil and, in the absence of the biological process, this crop would require 4-5 M tonnes of N at an annual cost of almost 1 billion dollars. Crop rotation, soil reclamation, forestry, forage mixed cropping, intercropping with grasses and legumes, associative nitrogen fixation with non-legume crops, such as sugarcane, and other agricultural practices in Brazil are also dependent on biological nitrogen fixation. The Brazilian experience with biological nitrogen fixation is a paradigm to be followed by all countries where nitrogen fertiliser is expensive or where present day environmental concerns demand a feasible, efficient and inexpensive alternative to chemical N-fertilizers.