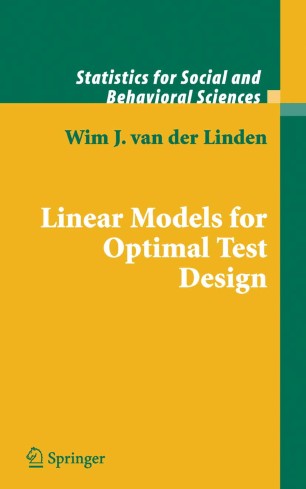 This book begins with a reflection on the history of test design--the core activity of all educational and psychological testing. It then presents a standard language for modeling test design problems as instances of multi-objective constrained optimization. The main portion of the book discusses test design models for a large variety of problems from the daily practice of testing, and illustrates their use with the help of numerous empirical examples. The presentation includes models for the assembly of tests to an absolute or relative target for their information functions, classical test assembly, test equating problems, item matching, test splitting, simultaneous assembly of multiple tests, tests with item sets, multidimensional tests, and adaptive test assembly. Two separate chapters are devoted to the questions of how to design item banks for optimal support of programs with fixed and adaptive tests. Linear Models for Optimal Test Design, which does not require any specific mathematical background, has been written to be a helpful resource on the desk of any test specialist.

Wim J. van der Linden is Professor of Measurement and Data Analysis, University of Twente, The Netherlands. His specialization is psychometric theory and methods, and he has been an active researcher of item response theory throughout his career. His current research is on test design, adaptive testing, test equating, and response-time modeling. Professor van der Linden is a past president of the Psychometric Society and a recipient of the NCME lifetime achievement award for his work on educational measurement.