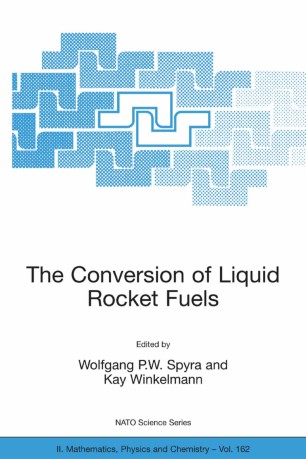 The Conversion of Liquid Rocket Fuels

Risk Assessment, Technology and Treatment Options for the Conversion of Abandoned Liquid Ballistic Missile Propellants (Fuels and Oxidizers) in Azerbaijan

Prof. Dr. -Ing. Wolfgang Spyra Brandenburg University of Technology in Cottbus, Germany The demilitarization and conversion of military properties wor- wide has been a topic of growing importance since the end of the Cold War. The slowing of the arms race brought on by weapons treaties and relaxed tensions between NATO and Warsaw Pact nations caused sto- piles of conventional weapons to become superfluous. The need to process and dispose of such weapons began more quickly in NATO countries. This demilitarization process began shortly after the reunification of Germany and was largely completed by the mid to late 1990’s. The remaining process, no small task in itself, of converting lands formerly used by the military into safe and environmentally acceptable landscapes may continue for decades to come. Due to a lack of resources and technology, the process of demilitarization in the former Warsaw Pact countries has launched more slowly. In 2002 both Georgia and Moldova finished projects which destroyed their stocks of liquid ballistic missile components. Both these projects were carried out through the cooperative support of trans-national organizations, private contractors, and research institutions. The Republic of Azerbaijan now finds itself at the beginning of its demilitarization process. Stored at the country’s military depots are over 2000 tons of missile fuels, oxidizer, and chemical additives. This hazardous waste is kept in tanks intended only for temporary transport and storage.