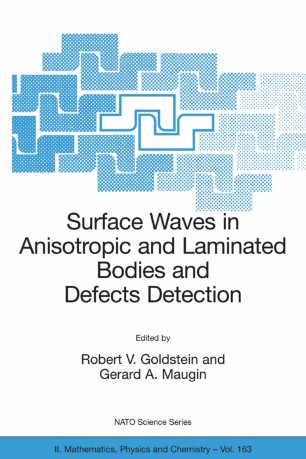 Surface Waves in Anisotropic and Laminated Bodies and Defects Detection

Among the variety of wave motions one can single out surface wave pr- agation since these surface waves often adjust the features of the energy transfer in the continuum (system), its deformation and fracture. Predicted by Rayleigh in 1885, surface waves represent waves localized in the vicinity ofextendedboundaries(surfaces)of?uidsorelasticmedia. Intheidealcase of an isotropic elastic half-space while the Rayleigh waves propagate along the surface, the wave amplitude (displacement) in the transverse direction exponentially decays with increasing distance away from the surface. As a resulttheenergyofsurfaceperturbationsislocalizedbytheRayleighwaves within a relatively narrow layer beneath the surface. It is this property of the surface waves that leads to the resonance phenomena that accompany the motion of the perturbation sources (like surface loads) with velocities close to the Rayleigh one; (see e. g. , R. V. Goldstein. Rayleigh waves and resonance phenomena in elastic bodies. Journal of Applied Mathematics and Mechanics (PMM), 1965, v. 29, N 3, pp. 608-619). It is essential to note that resonance phenomena are also inherent to the elastic medium in the case where initially there are no free (unloaded) surfaces. However, they occur as a result of an external action accompanied by the violation of the continuity of certain physical quantities, e. g. , by crack nucleation and dynamic propagation. Note that the aforementioned resonance phenomena are related to the nature of the surface waves as homogeneous solutions (eigenfunctions) of the dynamic elasticity equations for a half-space (i. e. nonzero solutions at vanishing boundary conditions).