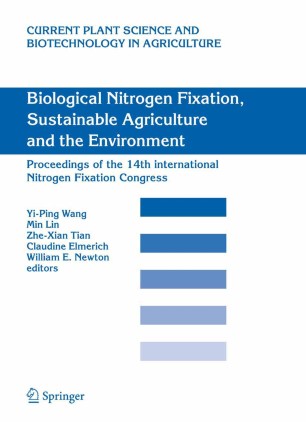 The 14th International Nitrogen Fixation Congress was held in Beijing, China from October 27th through November 1st, 2004. This volume constitutes the proceedings of the Congress and represents a compilation of the presentations by scientists from more than 30 countries around the World who came to Beijing to discuss the progress made since the last Congress and to exchange ideas and information. This year marked the 30th anniversary of the first Congress held in Pullman, Washington, USA, in 1974. Since then, this series of Congresses has met five times in North America (three in the United States and once each in Canada and Mexico), once in South America (Brazil), four times in Western Europe (once each in Spain, The Netherlands, Germany and France), once in Eastern Europe (Russia), and once in Australia; and now for the first time in Asia. China was a most appropriate choice because China is a big country with the largest population in the World, about 1. 3 billion people, which is about 22% of the World’s population. It is traditionally an agricultural country, even though China has only 7% of the available farming land. This situation explains why agriculture and its productivity are major issues for the Chinese people, its government and the scientists in the field.