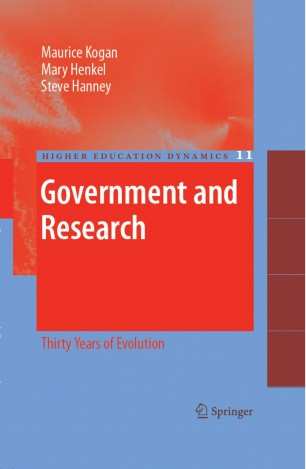 There has been a flare-up in interest in science policy and a key factor in this is the increased interest in analysing the role that research can play in informing policy making.

A pioneering venture in this field was Government and Research: The Rothschild Experiment in a Government Department (1983) Heinemann. No other work had penetrated the deepest recesses of government to observe at first hand the attempts of a major department to determine its research agenda through collaboration with leading scientists in a wide range of fields, to observe how research was commissioned, and then evaluated by scientific teams, and how it began to enter the policy blood streams of the departments.

This revised and augmented version updates the original text for current policy concerns and takes account of changes in science policy studies, whilst preserving its essential themes. It contains a succinct account of where matters now stand as well as an extended analysis of the themes that continue to dominate research and science policy.

"Finally, the rest of the world has caught up with Kogan and Henkel. Twenty-five years ago their ground-breaking study of the UK's Department of Health led them to conclude that sustained interaction between scientists and bureaucrats was the key to unleashing the value of science for the policy process. I found the first edition of this book the single most compelling and comprehensive treatment of this complex interaction. They may have felt like voices in the wilderness then; today, however, they can take their rightful place as pre-cursors and leaders of what has become a mass-movement for 'evidence-based policy'. This re-issued and significantly updated edition, includes many recent initiatives that they and colleague Steve Hanney might rightfully claim as their offspring. The timeliness of the current edition only serves to highlight just how far ahead of their time they really were."