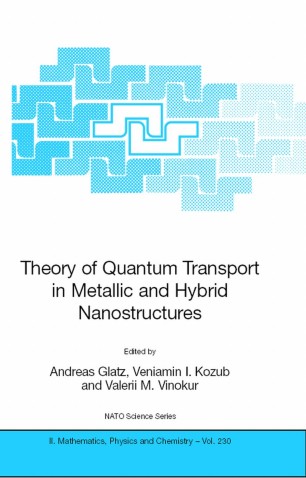 Theory of Quantum Transport in Metallic and Hybrid Nanostructures

A new science emerges at the intersection of modern physics, computer s- ence,andmaterialscience. Thestruggletofurtherminiaturizeisputtingna- technology to the verge of creating single-electron and/or single-spin devices that operate by moving a single electron (spin) and can serve as transistors, memory cells, and for logic gates. These devices take advantage of quantum physics that dominates nanometer size scales. The devices that utilize met- based hybrid nanostructures may possess signi?cant advantages over those exploiting purely semiconducting materials. First, the chemistry of metals is typically simpler than that of semiconductors. Second, the electric properties of metals are much less sensitive to the structural defects and impurities than those of semiconductors. Next, metallic devices allow better electric and th- mal contacts. Another important plus point is that in metals the electron de Broigle wavelength is smaller by many orders of magnitude as compared to that in semiconductors. This makes metallic devices more promising with respect to their size - down to the size of an atom. Further, high bulk and interface thermal conductance in metallic devices are bene?cial for the heat withdraw. And, last but by no means the least, the high electron velocity in metals promises to accelerate enormously operation rates with respect to those in semiconductor-based devices. The ?nal note is that metals can - hibit strong ferromagnetism and/or superconductivity.