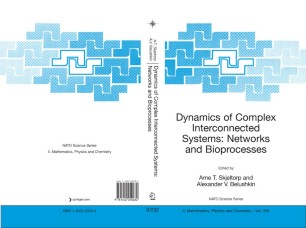 This volume comprises the proceedings of a NATO Advanced Study Institute (ASI) held at Geilo, Norway, 11-21 April 2005, the eighteenth ASI in a series held every two years since 1971. The objective of this ASI was to identify and discuss areas where synergism between modern physics and biology may be most fruitfully applied to the study of bioprocesses for molecular recognition, and of networks for converting molecular reactions into usable signals and appropriate responses. Many fields of research are confronted with networks. Genetic and metabolic networks describe how proteins, substrates and genes interact in a cell; social networks quantify the interactions between people in the society; the Internet is a complex web of computers; ecological systems are best described as a web of species. In many cases, the interacting networks manifest so-called emergent properties that are not possessed by any of the individual components. This means that the detailed knowledge of the components is insufficient to describe the whole system. Recent work has indicated that networks in nature have so-called scale-free characteristics, and the associated dynamic network modelling shows unexpected results such as an amazing robustness against accidental failures, a property that is rooted in their inhomogeneous topology. Understanding these phenomena and turning them to use in chemical and biological threat detection and response will require exploring a wide range of network structures as well.