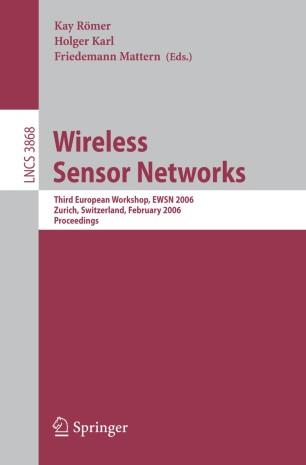 This volume contains the proceedings of EWSN 2006, the third in a series of - ropean workshops on wireless sensor networks. The workshop took place at ETH Zurich from February 13 to 15, 2006. Its objective was to present, discuss, and explore the latest technical developments in the ?eld of wireless sensor networks, as well as potential future directions. Wireless sensor networks provide a bridge between traditional information systems and the physical world, with collections of wirelessly networked s- sor nodes being deployed in our physical environment to cooperatively monitor real-world phenomena, but also to control aspects of the physical world. In c- trast to traditional computing systems which are mostly decoupled from the real world,wirelesssensornetworksareinherentlyandcloselyintegratedwiththereal world, with data about the physical environment being captured and processed automatically, online, and in real time. This paradigmatic change comes with a number of conceptual and technical challenges involving a wide range of dis- plines in computer science and electrical engineering, but also material sciences, MEMS technology, and power engineering, thus making wireless sensornetworks a multidisciplinary area of research. This workshop series aims at providing a high-level scienti?c forum to implement the cross-disciplinary exchange of ideas andresultsthatisessentialforthistypeofresearcharea. WhilebasedinEurope, the workshop serves as a truly international forum with 40% of the submissions originating from Europe, 38% from Asia and Australia, 20% from the Americas, and2%fromAfrica. Wireless sensor networks has become an active and popular research area, which is witnessed by the 133 submissions we received from authors all over the world. TheProgramCommitteechose21papersforinclusionintheworkshop.