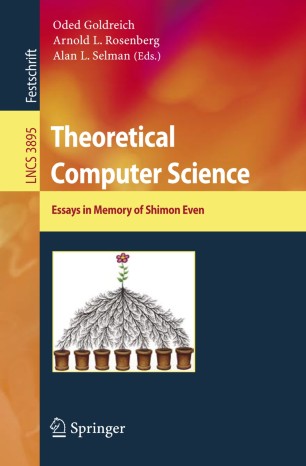 Essays in Memory of Shimon Even

On May 1, 2004, the world of theoretical computer science su?ered a stunning loss: Shimon Even passed away. Few computer scientists have had as long, s- tained, and in?uential a career as Shimon. Shimon Even was born in Tel-Aviv in 1935. He received a B.Sc. in Elect- cal Engineering from the Technion in 1959, an M.A. in Mathematics from the University of Northern Carolina in 1961, and a Ph.D. in Applied Mathematics from Harvard University in 1963. He held positions at the Technion (1964–67 and 1974–2003), Harvard University (1967–69), the Weizmann Institute (1969– 74), and the Tel-Aviv Academic College (2003-04). He visited many universities and research institutes, including Bell Laboratories, Boston University, Cornell, Duke, Lucent Technologies, MIT, Paderborn, Stanford, UC-Berkeley, USC and UT-Dallas. Shimon Even played a major role in establishing computer science education in Israel and led the development of academic programs in two major insti- tions: the Weizmann Institute and the Technion. In 1969 he established at the Weizmann the ?rst computer science education program in Israel, and led this program for ?ve years. In 1974 he joined the newly formed computer science department at the Technion and shaped its academic development for several decades. These two academic programs turned out to have a lasting impact on the evolution of computer science in Israel.