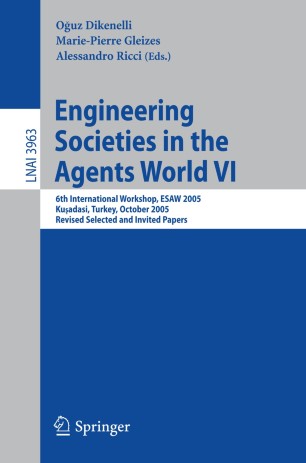 ESAW: International Workshop on Engineering Societies in the Agents World

ESAW 2005 took place at the Pine Bay Hotel in Kusadasi, Turkey at the end of the October 2005. It was organized as a stand-alone event as were ESAW 2004and ESAW 2003.Following the initial ESAW vision,which wasset in 1999, by the members of the working group on “Communication, Coordination and Collaboration” of Agentlink, ESAW 2005 continued to focus on the engineering of complex software systems in terms of multi-agent societies, especially the social and environmental aspects of such societies. The number of participants (40 researchers from 10 countries) and the highly interactive discussions held during the workshop showed the augmented importance of the initial vision as well as the e?ectiveness of ESAW as a well-established research forum. It is obvious that today’s interconnected world increases the importance of approaches concerning the engineering of complex and distributed software systems. These kinds of large scale systems, made up of massive numbers of autonomous components, force us to discover new and novel approaches to model and engineer such systems as agent societies. It is very likely that such innovations will exploit lessons from a variety of di?erent scienti?c disciplines, such as sociology, economics, organizational science and biology: ESAW 2005 included presentations from these domains in addition to its traditional - search topics.