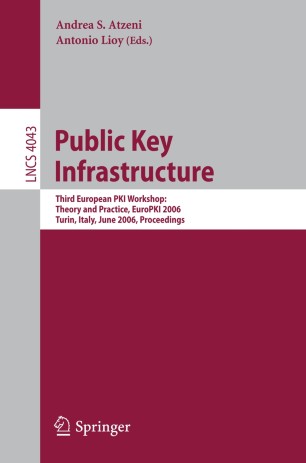 Today, PKIs have come of age and they support the security of several large networked systems, such as company-wide document management systems,- governmentapplicationsandsecureVPN.However,despitethissuccess,the?eld has not yet reachedits full scienti?c maturity and there is still room for research in this area. For example, open issues exist in the e?cient management of large PKI (especially with respect to certi?cate validation), better performance could be attained by improved cryptographic techniques and innovative applications are continuously proposed. To discuss progress in the PKI ?eld, the European PKI workshop series was established in 2004, following similar initiatives in Asia and the USA. The ?rst two events of this series took place on the Island of Samos, Greece (EuroPKI 2004), and in Canterbury, UK (EuroPKI 2005). This book contains the proceedings of the Third European PKI Workshop (EuroPKI 2006), held at the Politecnico di Torino, Italy, on June 19-20, 2006. In response to the Call for Papers, about 50 submissions were received. All submissions werereviewed by at least two reviewers(external or members of the Program Committee) and most of them got three reviews. At the end of this process, 22 papers were selected, 18 in their full form and 4 as short papers. These papers led to a lively workshop, with a good mixture between theory and application, continuing the success of the previous workshops in the series.