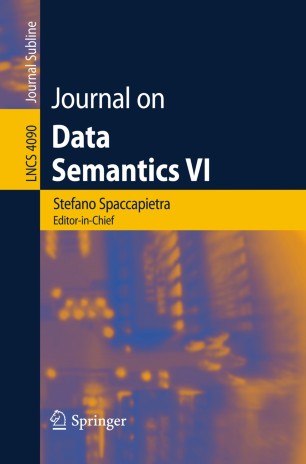 • Data warehousing and semantic data mining • Spatial, temporal, multimedia and multimodal semantics • Semantics in data visualization • Semantic services for mobile users • Supporting tools • Applications of semantic-driven approaches These topics are to be understood as speci?cally related to semantic issues. Contributions submitted to the journal and dealing with semantics of data will be considered even if they are not within the topics in the list. While the physical appearanceof the journal issues looks like the books from the well-known Springer LNCS series, the mode of operation is that of a jo- nal. Contributions can be freely submitted by authors and are reviewed by the Editorial Board. Contributions may also be invited, and nevertheless carefully reviewed, as in the case for issues that contain extended versions of best papers from major conferences addressing data semantics issues. Special issues, foc- ing on a speci?c topic, are coordinated by guest editors once the proposal for a special issue is accepted by the Editorial Board. Finally, it is also possible that a journal issue be devoted to a single text. The journal published its ?rst volumein 2003(LNCS 2800),its secondvolume at the beginning of 2005(LNCS 3360), and its third volume in Summer 2005 (LNCS 3534). Volumes I, II and V are special issues composed of selected extended versions of best conference papers. Volume III is a special issue on Semantic-Based Geographical Infor- tion Systems, coordinated by guest editor Esteban Zim´ anyi.