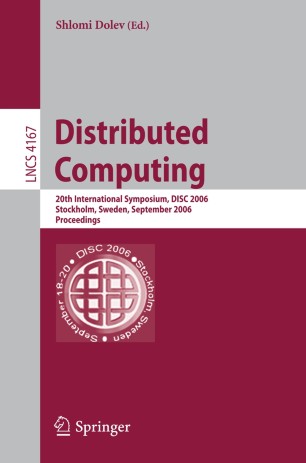 DISC, the International Symposium on DIStributed Computing, is an annual forum for presentation of research on all facets of distributed computing, inc- ding the theory, design, analysis, implementation, and application of distributed systems and networks. The 20th anniversary edition of DISC was held on S- tember 18-20, 2006, in Stockholm, Sweden. There were 145 extended abstracts submitted to DISC this year, and this - lume contains the 35 contributions selected by the Program Committee and one invited paper among these 145 submissions. All submitted papers were read and evaluated by at least three Program Committee members, assisted by external reviewers. The ?nal decision regarding every paper was taken during the P- gram Committee meeting, which took place in Beer-Sheva, June 30 and July 1, 2006. The Best Student Award was split and given to two papers: the paper “- act Distance Labelings Yield Additive-Stretch Compact Routing Schemes,” by Arthur Bradly, and Lenore Cowen, and the paper “A Fast Distributed App- ximation Algorithm for Minimum Spanning Trees” co-authored by Maleq Khan and Gopal Pandurangan. The proceedings also include 13 three-page-long brief announcements (BA). TheseBAsarepresentationsofongoingworksforwhichfullpapersarenotready yet, or of recent results whose full description will soon be or has been recently presented in other conferences. Researchers use the BA track to quickly draw the attention of the community to their experiences, insights and results from ongoing distributed computing research and projects. The BAs included in this proceedings volume were selected among 26 BA submissions.