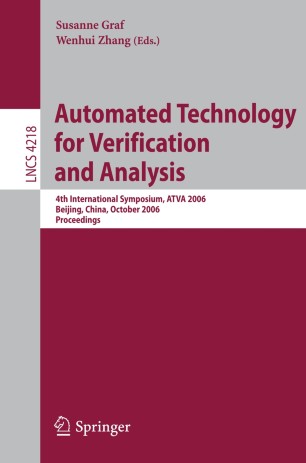 ATVA: International Symposium on Automated Technology for Verification and Analysis

Automated Technology for Verification and Analysis

The Automated Technology for Veri?cation and Analysis (ATVA) international symposium series was initiated in 2003, responding to a growing interest in formal veri?cation spurred by the booming IT industry, particularly hardware design and manufacturing in East Asia. Its purpose is to promote research on automated veri?cation and analysis in the region by providing a forum for int- action between the regional and the international research/industrial commu- ties of the ?eld. ATVA 2006, the fourth of the ATVA series, was held in Beijing, China, October 23-26, 2006. The main topics of the symposium include th- ries useful for providing designers with automated support for obtaining correct software or hardware systems, as well as the implementation of such theories in tools or their application. This year, we received a record number of papers: a total of 137 submissions from 27 countries. Each submission was assigned to three Program Comm- tee members, who could request help from subreviewers, for rigorous and fair evaluation. The ?nal deliberation by the Program Committee was conducted through Springer’s Online Conference Service for a duration of about 10 days after nearly all review reports had been collected. In the end, 35 papers were selected for inclusion in the program. ATVA 2006 had three keynote speeches given respectively by Thomas Ball, Jin Yang, and Mihalis Yannakakis. The main symposium was preceded by a tutorial day, consisting of three two-hourlectures given by the keynotespeakers.