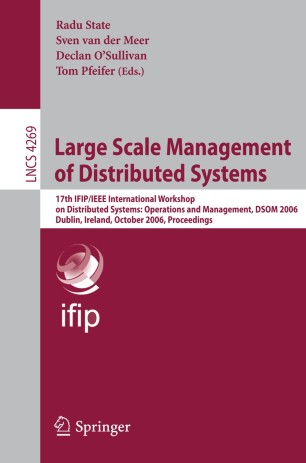 th This volume presents the proceedings of the 17 IFIP/IEEE International Workshop on Distributed Systems: Operations and Management (DSOM 2006), which was held rd th in Dublin, Ireland during October 23 to 25 , 2006. In line with its reputation as one of the pre-eminent fora for the discussion and debate of advances of distributed systems management, the 2006 iteration of DSOM brought together an international audience of researchers and practitioners from both industry and academia. th DSOM 2006 was the 17 in a series of annual workshops, and it followed the footsteps of highly successful previous meetings, the most recent of which were held in Barcelona, Spain (DSOM 2005), Davis, USA (DSOM 2004), Heidelberg, Germany (DSOM 2003), Montreal, Canada (DSOM 2002) and Nancy, France (DSOM 2001). The goal of the DSOM workshops is to bring together researchers in the areas of networks, systems and services management, from both industry and academia, to discuss recent advances and foster future growth in these ?elds. In contrast to the larger management symposia, such as Integrated Management (IM) and Network Operations and Management (NOMS), the DSOM workshops are organised as sing- track programmes in order to stimulate interaction among participants. Following the excellent experiences from the previous year, DSOM was for the th