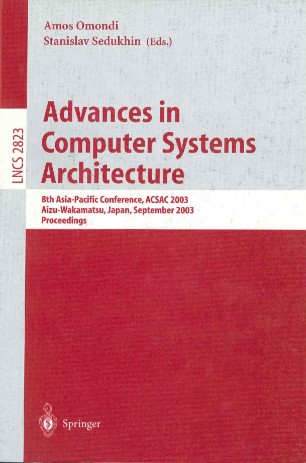 This conference marked the ?rst time that the Asia-Paci?c Computer Systems Architecture Conference was held outside Australasia (i. e. Australia and New Zealand), and was, we hope, the start of what will be a regular event. The conference started in 1992 as a workshop for computer architects in Australia and subsequently developed into a full-?edged conference covering Austra- sia. Two additional major changes led to the present conference. The ?rst was a change from “computer architecture” to “computer systems architecture”, a change that recognized the importance and close relationship to computer arc- tecture of certain levels of software (e. g. operating systems and compilers) and of other areas (e. g. computer networks). The second change, which re?ected the increasing number of papers being submitted from Asia, was the replacement of “Australasia” with “Asia-Paci?c”. This year’s event was therefore particularly signi?cant, in that it marked the beginning of a truly “Asia-Paci?c” conference. It is intended that in the future the conference venue will alternate between Asia and Australia/New Zealand and, although still small, we hope that in time the conference will develop into a major one that represents Asia to the same - tent as existing major computer-architecture conferences in North America and Europe represent those regions.