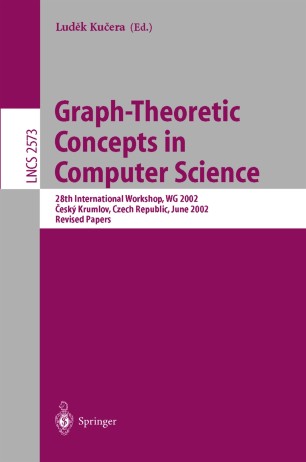 The 28th International Workshop on Graph-Theoretic Concepts in Computer ? Science (WG 2002) was held in Cesky ´ Krumlov, a beautiful small town in the southern part of the Czech Republic on the river Vltava (Moldau), June 13–15, 2002. The workshop was organized by the Department of Applied Mathematics of the Faculty of Mathematics and Physics of Charles University in Prague. Since 1975, WG has taken place in Germany 20 times, twice in Austria and The Netherlands, and once in Italy, Slovakia, and Switzerland. As in previous years, the workshop aimed at uniting theory and practice by demonstrating how graph-theoretic concepts can be applied to various areas in Computer Science, or by extracting new problems from applications.The workshop was devoted to the theoretical and practical aspects of graph concepts in computer science, and its contributed talks showed how recent research results from algorithmic graph theory can be used in computer science and which graph-theoretic questions arise from new developments in computer science. Altogether 61 research papers were submitted and reviewed by the program committee. The program committee represented the wide scienti?c spectrum, and in a careful reviewing process with four reports per submission it selected 36papersforpresentationattheworkshop.Thereferees’commentsaswellasthe numerous fruitful discussions during the workshop have been taken into account by the authors of these conference proceedings.