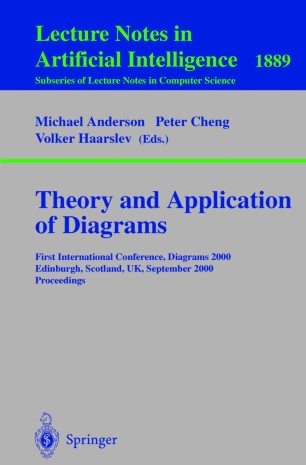 Diagrams: International Conference on Theory and Application of Diagrams

Theory and Application of Diagrams

Diagrams 2000 is dedicated to the memory of Jon Barwise. Diagrams 2000 was the ?rst event in a new interdisciplinary conference series on the Theory and Application of Diagrams. It was held at the University of Edinburgh, Scotland, September 1-3, 2000. Driven by the pervasiveness of diagrams in human communication and by the increasing availability of graphical environments in computerized work, the study of diagrammatic notations is emerging as a research ?eld in its own right. This development has simultaneously taken place in several scienti?c disciplines, including, amongst others: cognitive science, arti?cial intelligence, and computer science. Consequently, a number of di?erent workshop series on this topic have been successfully organized during the last few years: Thinking with Diagrams, Theory of Visual Languages, Reasoning with Diagrammatic Representations, and Formalizing Reasoning with Visual and Diagrammatic Representations. Diagrams are simultaneously complex cognitive phenonema and sophis- cated computational artifacts. So, to be successful and relevant the study of diagrams must as a whole be interdisciplinary in nature. Thus, the workshop series mentioned above decided to merge into Diagrams 2000, as the single - terdisciplinary conference for this exciting new ?eld. It is intended that Diagrams 2000 should become the premier international conference series in this area and provide a forum with su?cient breadth of scope to encompass researchers from all academic areas who are studying the nature of diagrammatic representations and their use by humans and in machines.