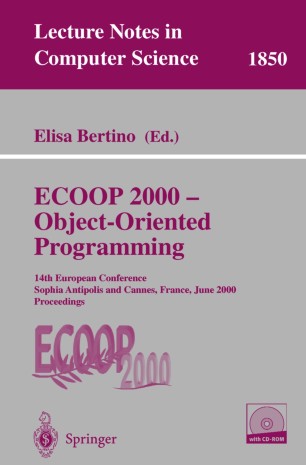 Following a 13-year tradition of excellence, the 14th ECOOP conference repeated the success of its predecessors. This excellence is certainly due to the level of maturity that object-oriented technology has reached, which warrants its use as a key paradigm in any computerized system. The principles of the object-oriented paradigm and the features of systems, languages, tools, and methodologies based on it are a source of research ideas and solutions to many in all areas of computer science. ECOOP 2000 showed a thriving eld characterized by success on the practical side and at the same time by continuous scienti c growth. Firmly established as a leading forum in the object-oriented arena, ECOOP 2000 received 109 high quality submissions. After a thorough review process, the program committee selected 20 papers, which well re?ect relevant trends in object-oriented research: object modeling, type theory, distribution and coo- ration, advanced tools, programming languages. The program committee, c- sisting of 31 distinguished researchers in object-orientation, met in Milan, Italy, to select the papers for inclusion in the technical program of the conference.