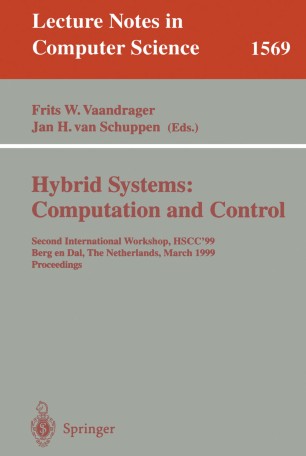 This volume contains the proceedings of the Second International Workshop on Hybrid Systems: Computation and Control (HSCC’99) to be held March 29- 31, 1999, in the village Berg en Dal near Nijmegen, The Netherlands. The rst workshop of this series was held in April 1998 at the University of California at Berkeley. The series follows meetings that were initiated by Anil Nerode at Cornell University. The proceedings of those meetings were published in the Springer-Verlag LNCS Series, Volumes 736, 999, 1066, 1201, and 1273. The p- ceedings of the rst workshop of the new series was published in LNCS 1386. The focus of the workshop is on modeling, control, synthesis, design, and ve- cation of hybrid systems. A hybrid system is a theoretical model for a computer controlled engineering system, with a dynamics that evolves both in a discrete state set and in a family of continuous state spaces. Research is motivated by, for example, control of electro-mechanical systems (robots), air tra c control, control of automated freeways, and chemical process control. The emerging - search area of hybrid systems overlaps both with computer science and with control theory. The interaction between researchers from these elds is expected to be fruitfull for the development of the area of hybrid systems.