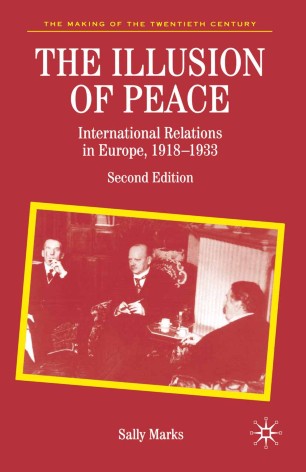 The Illusion of Peace

Sally Marks provides a compelling analysis of European diplomacy between the First World War and Hitler's advent. She explores in clear and lively prose the reasons why successive efforts failed to create a lasting peace in the interwar era. Building on the theories of the first edition - many of which have become widely accepted since its publication in 1976 - Marks reassesses Europe's leaders of the period, and the policies of the powers between 1918 and 1933, and beyond.

Strongly interpretative and archivally based, The Illusion of Peace examines the emotional, ethnic, and economic factors responsible for international instability, as well as the distortion of the balance of power, the abnormal position of the Soviet Union, the weakness of France and the uncertainty of her relationship with Britain, and the inadequacy of the League of Nations. In so doing, the study clarifies the complex topics of reparations and war debts and challenges traditional assumptions, concluding that widespread western devotion to disarmament and dedication to peace were two of several reasons why democratic statesmen could not respond decisively to Hitler's threat. In this new edition Marks also argues that the Allied failure to bring defeat home to the German people in 1918-19 generated a resentment which contributed to interwar instability and Hitler's rise.

This highly successful study has been thoroughly revised and updated to reflect the latest scholarship. Now in its second edition, it remains the essential introduction to the tense political and diplomatic situation in Europe during the interwar years.