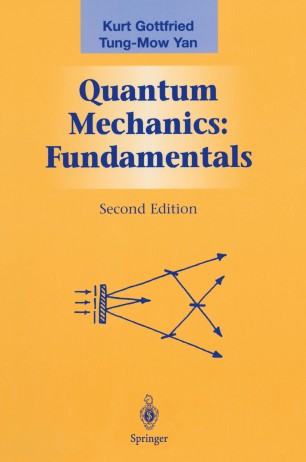 This classic text provides a comprehensive exposition of the concepts and techniques of quantum mechanics. The phenomena treated are sufficiently simple to allow the student to readily assess the validity of the models so that attention is not deflected from the heart of the subject. To that end, the book concentrates on systems that can either be solved exactly or be handled by well-controlled, plausible approximations. With few exceptions, this means systems with a small number of degrees of freedom. The exceptions are many—electron atoms, the electromagnetic field and the Dirac equation. The inclusion of the last two topics reflects the belief that every physicist should now have some knowledge of these cornerstones of modern physics.

This new edition has been completely revised and rewritten throughout, but retains the clarity and readability of the first edition.

Born in Vienna, Kurt Gottfried emigrated to Canada in 1939 and received his Ph.D. in theoretical physics from the Massachusetts Institute of Technology in 1955. He is a professor emeritus of physics at Cornell University, and had previously been at Harvard University and at CERN in Geneva, Switzerland. He is the coauthor of Concepts of Particle Physics (with V.F. Weisskopf) and of Crisis Stability and Nuclear War. Gottfried has done research in both nuclear and particle physics; he has an active interest in arms control and human rights and is a founder and currently the Chair of the Union of Concerned Scientists.

Tung-Mow Yan, originally from Taiwan, received his Ph.D. in theoretical physics from Harvard University in 1968. He has been a member of the Cornell University faculty since 1970 after spending two years as a research associate at the Stanford Linear Accelerator Center. He has conducted research in many areas of elementary particle physics.