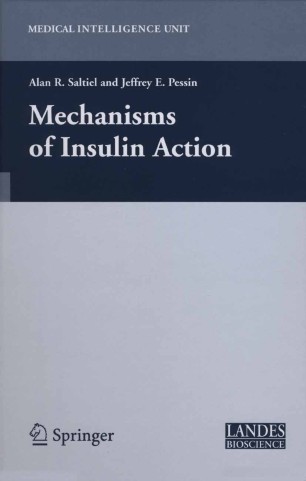 More than 18 million people in the United States have diabetes mellitus, and about 90% of these have the type 2 form of the disease. In addition, between 17 and 40 million people have insulin resistance, impaired glucose tolerance, or the cluster of abnormalities referred to variably as the metabolic syndrome, the dysmetabolic syndrome, syndrome X, or the insulin resistance syndrome. In all of these disorders, a central component of the pathophysiology is insulin resistance, i.e., reduced responsiveness to insulin in tissues such as muscle, fat and liver. Insulin resistance is also closely linked to other common health problems, including obesity, polycystic ovarian disease, hyperlipidemia, hypertension, and atherosclerosis. In this book, we will attempt to dissect the complexity of the molecular mechanisms of insulin action with a special emphasis on those features of the system that are subject to alteration in type 2 diabetes and other insulin resistant states. We explore insulin action at the most basic levels, through complex systems. The book will be appealing to basic and clinical scientists.