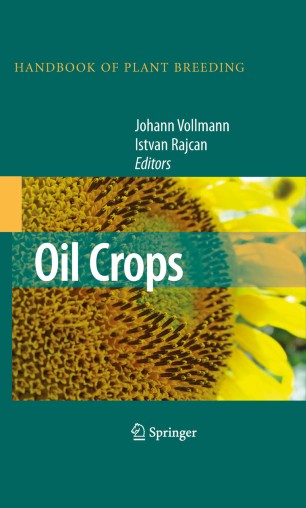 Vegetable oils have gained in importance during the past few decades resulting in the doubling of the world oil crop production in the last 25 years. Oil crops have been increasingly used as raw materials for food, livestock feed and non-food industrial applications. Plant breeding has played an essential role in supporting these developments: Breeding for higher yield and oil content allowed for an increase in oil production per unit area, whereas breeding for better oil quality has improved both the human health value of vegetable oils as well as the suitability of particular oils in specific industrial applications. Moreover, newly developed unique oil qualities are opening new opportunities in agricultural production and processing. Oil crop species have been developed in various botanical families from both the monocots and dicots. Thus, oil crops are a highly diverse set of species from short season annuals to perennials with a life span of over 2000 years. Consequently, breeding methods used for oil crop improvement include clonal breeding, pure line breeding, improvement of open-pollinated populations as well as hybrid breeding. In particular, the breeding procedures and techniques include almost every activity from simple mass selection and hybridization to specialized biotechnologies such as in vitro propagation or genetic engineering.

Oil Crops Breeding is a state-of-the-art compilation and a major reference text on oil crop breeding, which has been lacking for several decades. While the information accumulated in this volume is of primary interest to plant breeders, valuable insights are also offered to agronomists, molecular biologists, physiologists, plant pathologists, food scientists and university scholars from the comparative treatment of various oil crop species. Oil Crops Breeding presents 17 chapters devoted to the breeding of particular oil crop species. Oil crops with world-wide distribution such as soybean, sunflower, oilseed rape and related brassicas are presented side-by-side with tropical and subtropical species such as cotton seed, peanut or castor, the perennials oil palm, coconut and olive, minor oil crops of regional importance such as safflower, poppy, oil pumpkin or maize, and new oil crops such as lesquerella and cuphea. Origin and domestication, varietal groups, genetic resources, major achievements and current breeding goals, breeding methods, techniques and biotechnologies, and seed production are addressed depending on their relevance in a particular crop.

Each crop chapter has been written by outstanding experts in their respective fields. Whenever possible authors from different institutions or countries worked together on particular chapters, which contributed to broadened and well-balanced views on particular species or topics.

Johann Vollmann is a native of Vienna, Austria. He is teaching courses on plant breeding as an associate professor at the University of Natural Resources and Applied Life Sciences, Vienna. His main research interests are in the genetic improvement of quality characteristics of soybean and in pre-breeding of minor oil crops. Johann Vollmann has been a co-developer of soybean and camelina germplasm adapted to Central European conditions. He also served as a secretary general to EUCARPIA, the European Association for Research in Plant Breeding.

Istvan Rajcan grew up in Novi Sad, Serbia and moved to Canada in 1991. He completed his Ph.D. degree in canola breeding and biotechnology at the University of Guelph in Guelph, Ontario. He is a Professor and soybean breeder in the Department of Plant Agriculture at the University of Guelph and teaches plant breeding. Main areas of interest are genetics of modified seed composition for functional foods and bioproducts and crop adaptation to mega-environments. He serves on the editorial board four international journals including Theoretical and Applied Genetics. He has won several research awards, trained 13 graduate students and developed 30 soybean varieties.