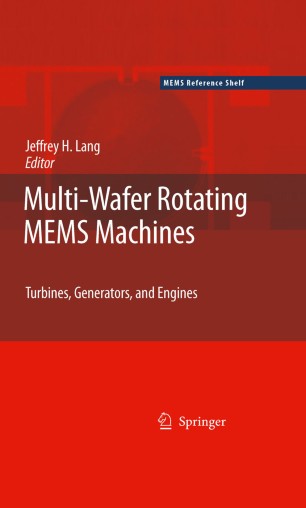 Multi-Wafer Rotating MEMS Machines: Turbines, Generators, and Engines is an outgrowth of the MIT Micro Engine Project. This project began at the Massachusetts Institute of Technology in the Fall of 1995, and later expanded through collaborations with the Georgia Institute of Technology, the Clark Atlanta University, and the University of Maryland at College Park.

The overall objective of the Micro Engine Project was to develop a small but power-dense gas turbine generator based on MEMS fabrication technologies. Thus, the project sought to develop a fuel-burning jet engine that would drive an electric generator to produce electric power for general purpose use.  Along the way, the project would advance the science and engineering of many disciplines from the MEMS perspective.

The Micro Engine Project was by its very nature a highly mult-disciplinary project pursuing advances in materials, structures, fabrication, combustion, heat transfer, turbomachinery, bearings and electromechanics, all at the MEMS scale.  Many of these topics are addressed in this volume, including:

About The MEMs Reference Shelf:

"The MEMs Reference Shelf is a series devoted to Micro-Electro-Mechanical Systems (MEMs) which combine mechanical, electrical, optical, or fluidic elements on a common microfabricated substrate to create sensors, actuators, and microsystems. The series, authored by leading MEMs practitioners, strives to provide a framework where basic principles, known methodologies and new applications are integrated in a coherent and consistent manner."