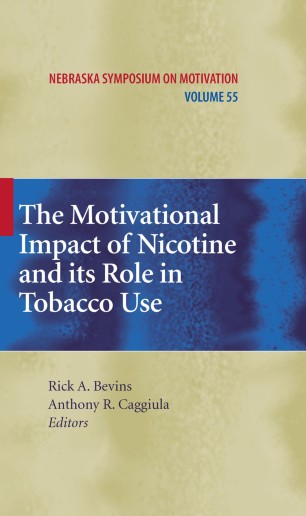 The Motivational Impact of Nicotine and its Role in Tobacco Use

Tobacco kills more people worldwide than any legal or illegal drug; the collective benefits of quitting smoking are plentiful, from improved health, increased life expectancy, and fewer sick days to less stress on families and health care providers. Tobacco use and addiction depend on the complex interplay of neurochemical, genetic, personal, and social factors—and nicotine, as the principal psychoactive ingredient in tobacco smoke, stands at the center of this equation.

The Motivational Impact of Nicotine and Its Role in Tobacco Use assembles papers from the 55th Nebraska Symposium on Motivation in a multidimensional analysis of nicotine at work. These papers present data, theories, and findings useful in understanding not only the mechanisms behind tobacco dependence and resistance to quitting, but also the issues involved in smoking cessation, initial use prevention, and relapse prevention. Some of the key areas covered include:

Given the continued impact of smoking on public health, The Motivational Impact of Nicotine and Its Role in Tobacco Use will attract a wide audience. This cutting-edge information is vital to the clinical psychologist, researcher, and policymaker involved in developing more efficient therapies, more effective treatment products, better delivery systems, or new avenues for research.

About the Nebraska Symposium on Motivation
The Nebraska Symposium on Motivation has been sponsored by the Department of Psychology at the University of Nebraska-Lincoln since 1953. Each year the Symposium invites leading scholars from around the world to speak at a conference devoted to a topic of current interest to psychology, the proceedings of which are published in an edited volume.