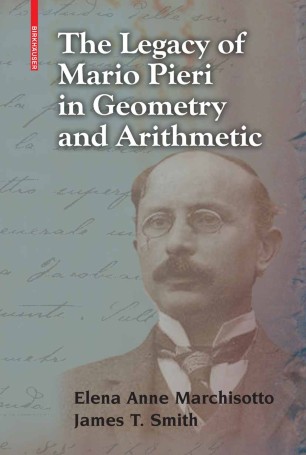 The Legacy of Mario Pieri in Geometry and Arithmetic

The Italian mathematician Mario Pieri (1860-1913) played an integral part in the research groups of Corrado Segre and Giuseppe Peano, and thus had a significant, yet somewhat underappreciated impact on several branches of mathematics, particularly on the development of algebraic geometry and the foundations of mathematics in the years around the turn of the 20th century. This book is the first in a series of three volumes that are dedicated to countering that neglect and comprehensively examining Pieri’s life, mathematical work, and influence in such diverse fields as mathematical logic, algebraic geometry, number theory, inversive geometry, vector analysis, and differential geometry.

The Legacy of Mario Pieri in Geometry and Arithmetic introduces readers to Pieri’s career and his studies in foundations, from both historical and modern viewpoints, placing his life and research in context and tracing his influence on his contemporaries as well as more recent mathematicians. The text also provides a glimpse of the Italian academic world of Pieri's time, and its relationship with the developing international mathematics community. Included in this volume are the first English translations, along with analyses, of two of his most important axiomatizations—his postulates for arithmetic, which Peano judged superior to his own; and his foundation of elementary geometry on the basis of point and sphere, which Alfred Tarski used as a basis for his own system.

Combining an engaging exposition, little-known historical information, exhaustive references and an excellent index, this text will be of interest to graduate students, researchers, and historians with a general knowledge of logic and advanced mathematics, and it requires no specialized experience in mathematical logic or the foundations of geometry.