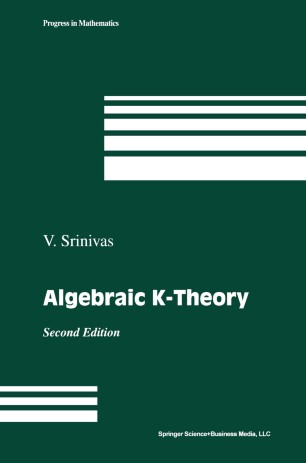 Algebraic K-Theory has become an increasingly active area of research. With its connections to algebra, algebraic geometry, topology, and number theory, it has implications for a wide variety of researchers and graduate students in mathematics. The book is based on lectures given at the author's home institution, the Tata Institute in Bombay, and elsewhere. A detailed appendix on topology was provided in the first edition to make the treatment accessible to readers with a limited background in topology. The second edition also includes an appendix on algebraic geometry that contains the required definitions and results needed to understand the core of the book; this makes the book accessible to a wider audience.

A central part of the book is a detailed exposition of the ideas of Quillen as contained in his classic papers "Higher Algebraic K-Theory, I, II." A more elementary proof of the theorem of Merkujev--Suslin is given in this edition; this makes the treatment of this topic self-contained. An application is also given to modules of finite length and finite projective dimension over the local ring of a normal surface singularity. These results lead the reader to some interesting conclusions regarding the Chow group of varieties.

"It is a pleasure to read this mathematically beautiful book..." ---WW.J. Julsbergen, Mathematics Abstracts

"The book does an admirable job of presenting the details of Quillen's work..." ---Mathematical Reviews