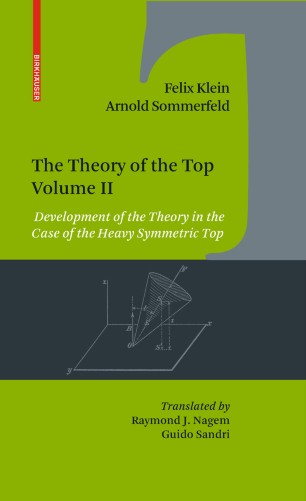 The Theory of the Top. Volume II

The Theory of the Top. Volume II. Development of the Theory in the Case of the Heavy Symmetric Top is the second in a series of four self-contained English translations of the classic and definitive treatment of rigid body motion.

* Complete and unabridged presentation with recent advances and
additional notes

* Each volume interweaves theory and applications

The first volume established the general kinematic and kinetic foundations of the theory.  Volume II discusses the motion of the symmetric top with a fixed support point, under the influence of gravity, in all its details.  The Theory of the Top was originally presented by Felix Klein as an 1895 lecture at Göttingen University that was broadened in scope and clarified as a result of collaboration with Arnold Sommerfeld.

Graduate students and researchers interested in theoretical and applied mechanics will find this a thorough and insightful account.

Other works in this series include Volume I. Introduction to the Kinematics and Kinetics of the Top, Volume III. Perturbations. Astronomical and Geophysical Applications, and Volume IV. Technical Applications of the Theory of the Top.