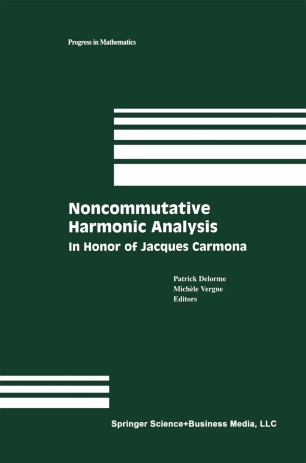 In Honor of Jacques Carmona

Part of the Progress in Mathematics book series (PM, volume 220)

This volume is devoted to the theme of Noncommutative Harmonic Analysis and consists of articles in honor of Jacques Carmona, whose scientific interests range through all aspects of Lie group representations. The topics encompass the theory of representations of reductive Lie groups, and especially the determination of the unitary dual, the problem of geometric realizations of representations, harmonic analysis on reductive symmetric spaces, the study of automorphic forms, and results in harmonic analysis that apply to the Langlands program.

General Lie groups are also discussed, particularly from the orbit method perspective, which has been a constant source of inspiration for both the theory of reductive Lie groups and for general Lie groups. Also covered is Kontsevich quantization, which has appeared in recent years as a powerful tool.