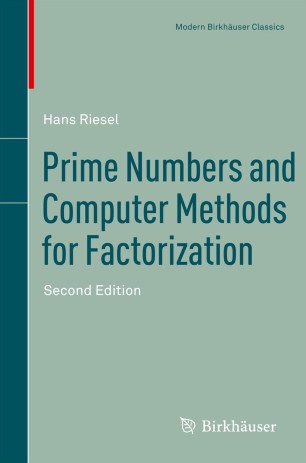 Published in the mid 1980s, the highly successful first edition of this title investigated the mathematical underpinnings of computer encryption, a discipline drawing heavily on the factorization of large numbers into primes. The book served a broad audience of researchers, students, practitioners of cryptography, and non-scientific readers with a mathematical inclination, treating four fundamental problems: the number of primes below a given limit, the approximate number of primes, the recognition of primes, and the factorization of large numbers.

The second edition of the work, released in the mid 1990s, expanded significantly upon the original book, including important advances in computational prime number theory and factorization, as well as revised and updated tables. With explicit algorithms and computer programs, the author illustrated applications while attempting to discuss many classically important results along with more modern discoveries.

Although it has been over a decade since the publication of this second edition, the theory it contained remains still highly relevant, and the particular cryptosystem it addressed (RSA public-key) is ubiquitous. Therefore, in addition to providing a historical perspective on many of the issues in modern prime number theory and data encryption, this soft cover version—which reproduces the second edition exactly as it originally appeared—offers affordable access to a great deal of valuable information. Highly readable for a wide variety of mathematicians, students of applied number theory, and others, this modern classic will be of interest to anyone involved in the study of number theory and cryptography.

Here is an outstanding technical monograph on recursive number theory and its numerous automated techniques. It successfully passes a critical milestone not allowed to many books, viz., a second edition... All in all, this handy volume continues to be an attractive combination of number-theoretic precision, practicality, and theory with a rich blend of computer science.  —Zentralblatt MATH

The book...is an enthusiastic introduction to some of the ideas concerned with primes and factorization. It should be of interest to anyone who would like to learn about the use of computers in number theory. —Mathematical Reviews