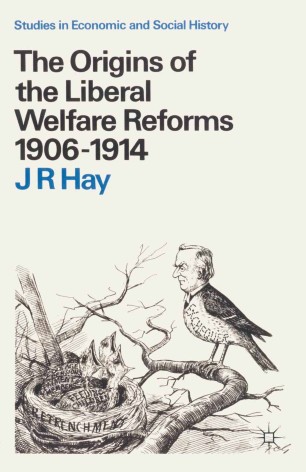 This study examines the different approaches of social scientists and historians to the origins of social welfare legislation between 1906 and 1914. From this critical review Mr Hay shows how the Liberal legislation can be seen as one example of a process common to advanced industrial societies. He outlines the fundamental economic, political, ideological and institutional pressures for reform, analyses recent research on each aspect and demonstrates the importance of the conversion of a significant proportion of the ruling elite to acceptance of the value of social legislation. The individual reforms are examined and assessment made of the particular influences which were important in each case.

Mr Hay concludes that the origins of the Liberal social legislation are not to be found in piecemeal remedies for specific social problems nor in the vision of a few influential individuals. There were, he shows, competing proposals for social reform at the turn of the century. Part of the problem is to explain why the Liberal solutions were adopted, but he poses the more fundamental question: Why were all the various proposals under discussion? In answer, he points out that Liberal social reform was only one part of a search for ways of preserving British society from internal and external challenges.