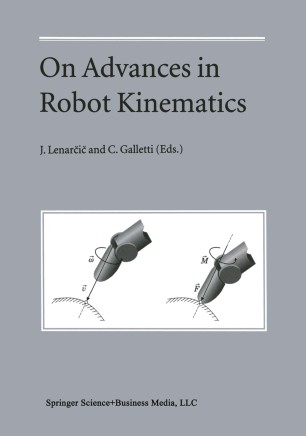 On Advances in Robot Kinematics

In the last decade, we have seen an extraordinary progress in the the­ ory and applications of robot kinematics. This has been motivated espe­ cially by the development of complex parallel and humanoid robots. The present book reports the most recent research advances in the theory, design, control and application of robotic systems, which are intended for a variety of purposes such as manipulation, manufacturing, automa­ tion, surgery, locomotion and biomechanics. The issues addressed are fundamentally kinematic in nature, including synthesis, calibration, re­ dundancy, force control, dexterity, inverse and forward kinematics, kine­ matic singularities, as well as over-constrained systems. Methods used include line geometry, quaternion algebra, screw algebra, and linear alge­ bra. These methods are applied to both parallel and serial multi-degree­ of-freedom systems. The results should interest researchers, teachers and students, in fields of engineering and mathematics related to robot theory, design, control and application. This is the sixth book of the series Advances in Robot Kinematics published by Kluwer. The contributions in this book had been rigorously reviewed by in­ dependent reviewers and fifty one articles had been recommended for publication. They were introduced in seven chapters. These articles were also reported and discussed at the ninth international symposium on Advances in Robot Kinematics which was held in June 2004 in Sestri Levante in Italy.