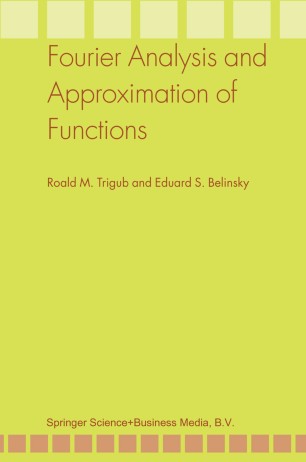 Fourier Analysis and Approximation of Functions

In Fourier Analysis and Approximation of Functions basics of classical Fourier Analysis are given as well as those of approximation by polynomials, splines and entire functions of exponential type.
In Chapter 1 which has an introductory nature, theorems on convergence, in that or another sense, of integral operators are given. In Chapter 2 basic properties of simple and multiple Fourier series are discussed, while in Chapter 3 those of Fourier integrals are studied.
The first three chapters as well as partially Chapter 4 and classical Wiener, Bochner, Bernstein, Khintchin, and Beurling theorems in Chapter 6 might be interesting and available to all familiar with fundamentals of integration theory and elements of Complex Analysis and Operator Theory. Applied mathematicians interested in harmonic analysis and/or numerical methods based on ideas of Approximation Theory are among them.
In Chapters 6-11 very recent results are sometimes given in certain directions. Many of these results have never appeared as a book or certain consistent part of a book and can be found only in periodics; looking for them in numerous journals might be quite onerous, thus this book may work as a reference source.
The methods used in the book are those of classical analysis, Fourier Analysis in finite-dimensional Euclidean space Diophantine Analysis, and random choice.