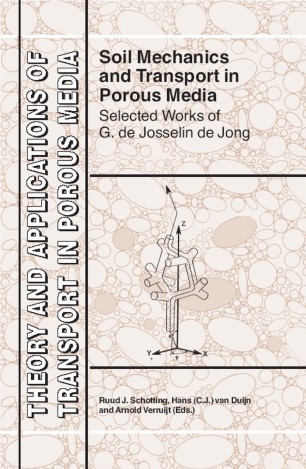 Part of the Theory and Applications of Transport in Porous Media book series (TATP, volume 19)

This book contains an overview of the most relevant scientific contributions of Gerard de Josselin de Jong to the development of both Soil Mechanics and Transport in Porous Media. The volume comprises a selection of papers by de Josselin de Jong as they were published in the international scientific literature. In addition, some unpublished, but higly relevant work has been included.

Most of the papers of de Josselin de Jong are concerned with issues related to soil mechanics. This is not surprising, considering the fact that he worked at Delft Soil Mechanics Laboratory and given the nature of his chair at Delft University of Technology. But occasionally he made an excursion to the area of flow and transport in porous media. It characterizes his ingenuity that most of these excursions led to papers that are now classics in the field.

The editors have chosen to divide his key publications into a group devoted to soil mechanics and a group devoted to flow and transport in porous media. The selected papers were published in the period 1950-1990. They clearly demontstrate the development of ideas and the profound contibutions of de Josselin de Jong. Each paper is a jewel on its own. He has an extremely original way of reasoning and illustrated intricate concepts and mechanisms with the aid of his famous hand-made drawings. In particular young scientists will enjoy reading these papers because important parts of today's porous media research find their roots in them, and because many questions raised by de Josselin de Jong are still open and subject to current investigations.

This volume is intended for scientists, engineers, and students working in geohydrology, geotechnical engineering, soil mechanics, environmental engineering, and transport in porous media.