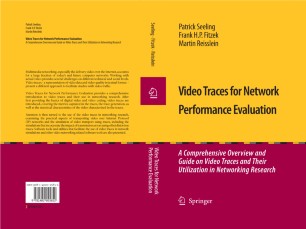 Multimedia networking applications and, in particular, the transport of c- pressed video are expected to contribute signi?cantly to the tra?c in the future Internet and wireless networks. For transport over networks, video is typically encoded (i. e. , compressed) to reduce the bandwidth requirements. Even compressed video, however, requires large bandwidths of the order of hundred kbps or Mbps. In addition, compressed video streams typically - hibit highly variable bit rates (VBR) as well as long range dependence (LRD) properties. This, in conjunction with the stringent Quality of Service (QoS) requirements (loss and delay) of video tra?c, makes the transport of video tra?covercommunicationnetworksachallengingproblem. Asaconsequence, in the last decade the networking research community has witnessed an - plosion in research on all aspects of video transport. The characteristics of video tra?c, video tra?c modeling, as well as protocols and mechanisms for the e?cient transport of video streams, have received a great deal of interest among networking researchers and network operators and a plethora of video transport schemes have been developed. For developing and evaluating video transport mechanisms and for - search on video networking in general, it is necessary to have available some characterizationofthevideo. Generally,therearethreedi?erentwaystoch- acterize encoded video for the purpose of networking research: (i)video tra?c model,(ii) video bit stream, and (iii) video tra?c trace.