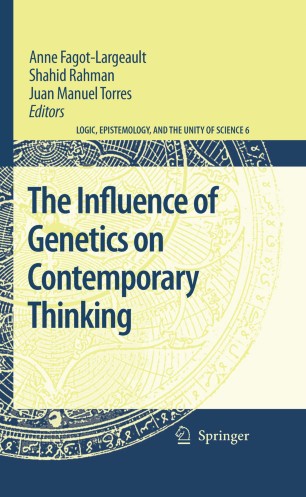 The Influence of Genetics on Contemporary Thinking

Part of the Logic, Epistemology, and The Unity of Science book series (LEUS, volume 6)

This volume reflects on the effects of recent discoveries in genetics on a broad range of scientific fields. In addition to neuroscience, evolutionary biology, anthropology and medicine, contributors analyze the effects of genetics on theories of health, law, epistemology and philosophy of biology. Social and moral concerns about the relationship between genetics, society and the individual also figure prominently. Genetic discoveries fuel central contemporary public policy debates concerning, for example, human cloning, equitable access to healthcare or the role of genetics in medicine. Perhaps more fundamentally, advances in genetics are altering our perception of human life and death.

An interview with François Jacob by Anne Fagot-Largeault opens the volume. In this interview, Jacob, who shared a Nobel Prize with André Lwoff and Jacques Monod for their discoveries concerning genetic control of enzyme and virus synthesis, addresses many of the central methodological epistemological and ethical questions covered in the volume. The dynamic interdisciplinary character of this volume makes it relevant to scholars from many disciplines, from biology, philosophy and the social sciences.