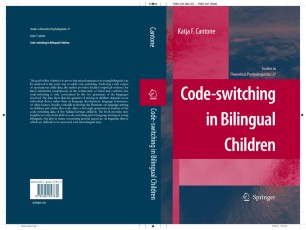 The goal of this volume is to prove that mixed utterances in young bilinguals can be analyzed in the same way as adult code-switching. Analyzing a rich corpus of spontaneous child data, the author provides detailed empirical evidence for latest minimalist assumptions on the architecture of mind and confirms that code-switching is only constrained by the two grammars of the languages involved. The data show that the quantity of mixing in children depends on an individual choice rather than on language development, language dominance, or other factors.

Besides critically reviewing the literature on language mixing in children and adults, this work offers a thorough grammatical analysis of the code-switching data of five Italian/German children. The book provides new insights not only in the field of code-switching and of language mixing in young bilinguals, but also in issues concerning general questions on linguistic theory which are difficult to be answered with monolingual data.