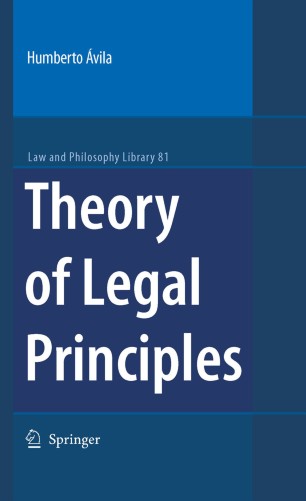 This book intends to help understand and apply principles and rules better. Its target is to keep the distinction between principles and rules whereas structuring it on different foundations than those jurisprudence ordinarily employs. The first object of investigation is the phenomenon of interpretation in Law in order to understand that the classification of certain normative species as either principles or rules depends in the first place on axiological connections that are not ready prior to the interpretation process that unveils them. Then, a definition of principles is proposed, aiming to understand what their unique characteristics are when compared to other norms of the legal order. Thirdly, the conditions for the application of principles and rules are examined, which are the normative applicative postulates. It will be shown, on one hand, that principles not only explicit values, but also set forth precise species of behaviors, though indirectly; on the other hand, the creation of conducts by rules is also to be weighed, even though the behavior set forth in advance may be overcome, depending on the accomplishment of a few requirements. That will surpass both the mere praise of values, which does not create behaviors, and the automatic application of rules. A model is proposed to explain the normative species, which includes structured weighing on the application process while encompassing substantive criteria of justice in its argument, through the analytical reconstruction of the concrete use of normative postulates, especially those of reasonableness and proportionality. All of that is done with a focus on the ability of intersubjective control of the argumentation, which often degenerates into capricious decisionism.

"Although there are books about legal rules, and although the role of legal principles has been a focus of legal theory since Dworkin, there has yet to be a serious systematic study of what legal principles are, where they come from, how they are identified, and how precisely they intersect with other sources in legal argument and legal decision-making. Professor Avila's much-needed book fills this gap with rigor, depth, and creativity, and it should become essential reading for anyone interested in legal reasoning and legal argumentation."