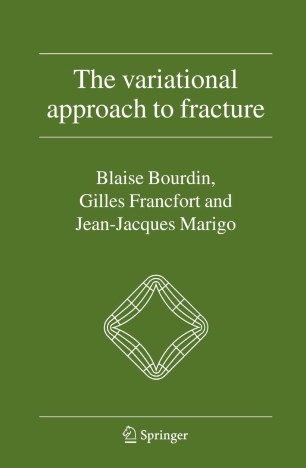 The Variational Approach to Fracture

One of the goals of the Journal of Elasticity: The Physical and Ma- ematical Science of Solids is to identify and to bring to the attention of the research community in the physical and mathematical sciences extensive expositions which contain creative ideas, new approaches and currentdevelopmentsinmodellingthebehaviourofmaterials. Fracture has enjoyed a long and fruitful evolution in engineering, but only in - cent years has this area been considered seriously by the mathematical science community. In particular, while the age-old Gri?th criterion is inherently energy based, treating fracture strictly from the point of view of variational calculus using ideas of minimization and accounting for the singular nature of the fracture ?elds and the various ways that fracture can initiate, is relatively new and fresh. The variational theory of fracture is now in its formative stages of development and is far from complete, but several fundamental and important advances have been made. The energy-based approach described herein establishes a consistent groundwork setting in both theory and computation. While itisphysicallybased,thedevelopmentismathematicalinnatureandit carefully exposes the special considerations that logically arise rega- ing the very de?nition of a crack and the assignment of energy to its existence. The fundamental idea of brittle fracture due to Gri?th plays a major role in this development, as does the additional dissipative feature of cohesiveness at crack surfaces, as introduced by Barenblatt. Thefollowinginvited,expositoryarticlebyB. Bourdin,G. Francfort and J. -J. Marigo represents a masterful and extensive glimpse into the fundamentalvariationalstructureoffracture.