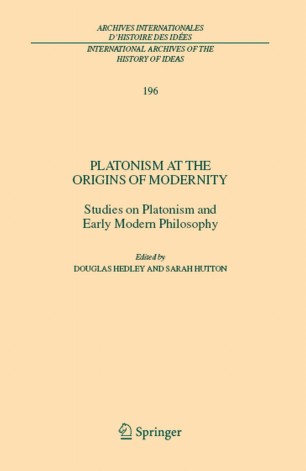 Platonism at the Origins of Modernity

Part of the International Archives of the History Of Ideas book series (ARCH, volume 196)

commentary, but by selection and accretion. Those inspired by Plato form as intrinsic a part of Platonism as Plato himself—these are the so-called Neo-P- tonists (a divisive latter-day term which implies discontinuity between Plato and 6 his later followers to the disadvantage of the latter). In the process of its long course of development, Platonism has gathered a long tradition of interpr- ers, whose contributions have been enriched by other philosophical strands—for example Stoicism, which is an important element in the philosophy of Plotinus. To this it must be added that so much of the impact of Platonism is indirect. The Platonism of many thinkers, especially in medieval times, was more often than not implicit, rather than conscious borrowing. It derived not from the Platonic corpus (most of which was unknown at that time), but indirectly through Philo, and theologians like Augustine and Origen. The combined effect of these factors is that the legacy of Platonism is rich, varied and extensive, but eludes the scope of focused enquiry. A further factor complicating assessments of Platonism in the modern era, is polarisation in the historiography itself. Historians of modern philosophy—at least in the anglophone world—readily adopt a model which counterposes ancient and modern. Drawing on a division, which the early modern philosophers themselves invoked, they employ an ‘ancient- 7 modern distinction’ as a principle for organising the history of philosophy.