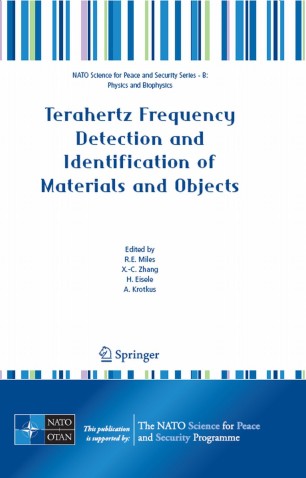 Terahertz Frequency Detection and Identification of Materials and Objects

Terahertz frequency sensing has a unique part to play in the detection and identification of materials and objects. This frequency range, corresponding to a wavelength of around 0.1 mm, can be used to identify materials from their molecular spectra and to produce images of concealed objects. Terahertz spectra of drugs of abuse and explosives presented by a number of the contributing authors show that the presence of these materials can be detected in envelopes, packages and through clothing.

The technology of terahertz detection has largely been developed around expensive and bulky femtosecond laser systems but, as described in this book, advances in semiconductor superlattice technology are leading to compact “electronic” sources such as the quantum cascade laser, two-terminal “Gunn” type oscillators and even a THz frequency amplifier. These advances towards electronic (as opposed to optical) THz systems mean that the technology will become portable and much less costly.

Terahertz remote sensing is also discussed with the possibility of detection over distances of up to 30m using existing technology or even through the use THz waves generated locally in the vicinity of a target using only air as the transducer.