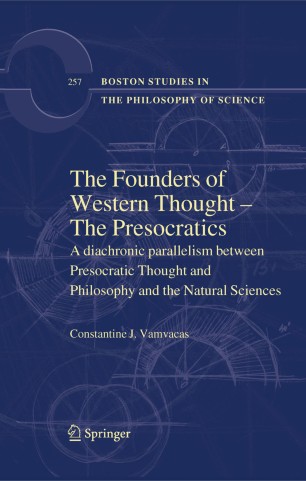 The Founders of Western Thought – The Presocratics

Part of the Boston Studies in the Philosophy of Science book series (BSPS, volume 257)

There are two main points within this book: Firstly, to make the founding and evolution of  Western thought accessible to the reflective man of our day, since the spirit of the Presocratics – although it is considered to constitute a true intellectual revolution - remains unknown to the broader community and secondly to shed greater light – probably for the first time - on the scientific dimension of the Presocratics’ work, and show its timeless value.

This book is a balanced interdisciplinary philosophic-scientific presentation of the evolution of Western thought through the presocratic tradition, where the synthesis of rationality and intuition – rather than their opposition - is the key to answering all questions of science, as we now understand the them. It is a book that investigates the
roots of Western science and philosophy, where probably for the first time a coherent interrelation is shown between presocratics’ thought and classical, as well as modern physical sciences.

It is addressed to the intelligent layperson as well as to the scientist of our time, who is interested in the emergence and evolution of Western thought – both scientific and philosophic.  It  will appeal to professionals and graduate students interested in general philosophy and philosophy of science.