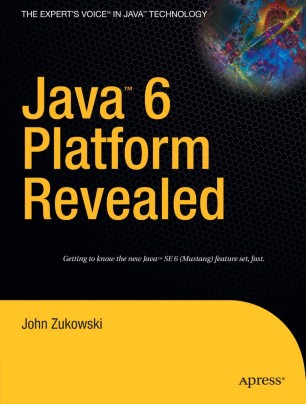 Be among the first to capture an early look at the libraries of Java SE 6, aka Mustang. While J2SE 5.0 is just now starting to become regularly adopted, Java 6 Platform Revealed takes a look at the next release of the Standard Edition platform to come from Sun.

New editions of the platform don't happen that frequently, but when they do, there is a lot to learn about quickly. If you want to come up to speed on the feature set as quickly as possible, Java 6 Platform Revealed will place you well ahead of the pack. You'll find 10 chapters of how to use the JSR implementations and library improvements that are now a part of Mustang. You'll learn about the scripting features of AWT and Swing, like splash screens, system tray access, and table sorting and filtering and lots more. What you won't find in Java 6 Platform Revealed is a "getting started with Java" tutorial. Come prepared with a good working knowledge of Java 5 platform for best results.

Not only will you see what's in Java's future, but you'll learn how to actually use many of the new features of the platform quickly.