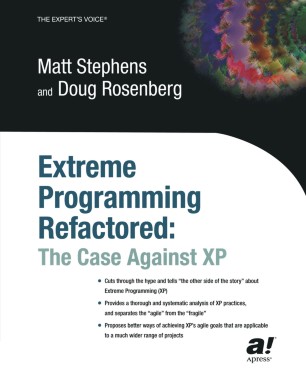 Extreme Programming Refactored: The Case Against XP (featuring Songs of the Extremos) takes a satirical look at the increasingly-hyped extreme programming (XP) methodology. It explores some quite astonishing Extremo quotes that have typified the XP approach quotes such as, “XPers are not afraid of oral documentation,” “Schedule is the customer's problem,” “Dependencies between requirements are more a matter of fear than reality” and “Concentration is the enemy.”

In between the chuckles, though, there is a serious analysis of XP's many flaws. The authors also examine C3, the first XP project, whose team (most of whom went on to get XP book deals shortly before C3's cancellation) described themselves as "the best team on the face of the Earth." (In a later chapter, the authors also note that one problem which can affect pair programmers is overconfidence—or is that "eXcessive courage"?). The authors examine whether the problems that led to C3's “inexplicable” cancellation could also afflict present-day XP projects.

In the final chapter, Refactoring XP, Matt and Doug suggest some ways of achieving the agile goals of XP using some XP practices (used in moderation) combined with other, less risk-laden methods.