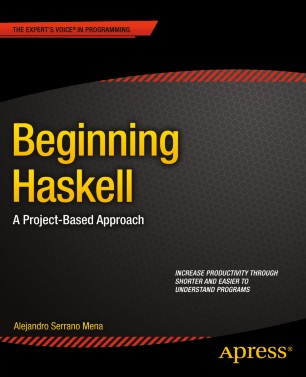 Beginning Haskell provides a broad-based introduction to the Haskell language, its libraries and environment, and to the functional programming paradigm that is fast growing in importance in the software industry. The book takes a project-based approach to learning the language that is unified around the building of a web-based storefront. Excellent coverage is given to the Haskell ecosystem and supporting tools. These include the Cabal build tool for managing projects and modules, the HUnit and QuickCheck tools for software testing, the Scotty framework for developing web applications, Persistent and Esqueleto for database access, and also parallel and distributed programming libraries.

Functional programming is gathering momentum, allowing programmers to express themselves in a more concise way, reducing boilerplate and increasing the safety of code. Indeed, mainstream languages such as C# and Java are adopting features from functional programming, and from languages implementing that paradigm. Haskell is an elegant and noise-free pure functional language with a long history, having a huge number of library contributors and an active community. This makes Haskell the best tool for both learning and applying functional programming, and Beginning Haskell the perfect book to show off the language and what it can do.