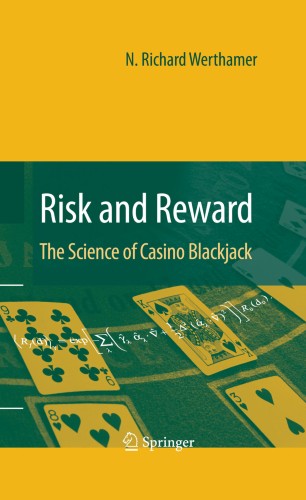 The Science of Casino Blackjack

For decades, casino gaming has been steadily increasing in popularity worldwide. Blackjack is among the most popular of the casino table games, one where astute choices of playing strategy can create an advantage for the player. Risk and Reward analyzes the game in depth, pinpointing not just its optimal strategies but also its financial performance, in terms of both expected cash flow and associated risk.

The book begins by describing the strategies and their performance in a clear, straightforward style. The presentation is self-contained, nonmathematical, and accessible to readers at all levels of playing skill, from the novice to the blackjack expert. Careful attention is also given to simplified, but still nearly optimal strategies that are easier to use in a casino. Unlike other books in the literature the author then derives each aspect of the strategy mathematically, to justify its claim to optimality. The derivations mostly use algebra and calculus, although some require more advanced analysis detailed in supporting appendices. For easy comprehension, formulae are translated into tables and graphs through extensive computation.

This book will appeal to everyone interested in blackjack: those with mathematical training intrigued by its application to this popular game as well as all players seeking to improve their performance.