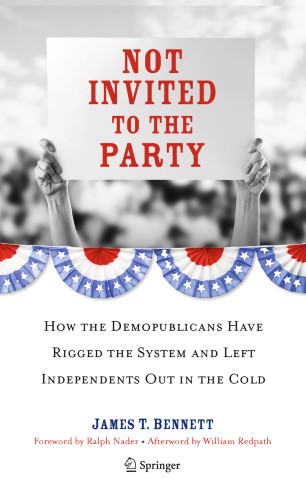 Not Invited to the Party

"In this caustic, irreverent book, James T. Bennett reveals how regulation of the political system is used to keep the ‘ins’ in and the ‘outs’ out. The United States has benefitted from the separation of church and state: Not Invited to the Party demonstrates how the country could benefit from a wall of separation between political parties, campaigns, and state."

For many participants and pundits, the 2008 U.S. Presidential election was a watershed event, representing unprecedented public involvement in the political process. Yet for third-party candidates and supporters, it was yet another reminder of how the dominant parties have co-opted the system to their advantage, crippling potential challengers and limiting voter choice. In Not Invited to the Party, James Bennett reveals how the Democrats and Republicans have contributed to an array of laws, subsidies, and programs that have secured their lock on American politics. The Founding Fathers, as has been generally forgotten, distrusted political parties. Nowhere in the U.S. Constitution are parties mentioned, much less given legal protection or privilege. This provocative book traces how by the end of the Civil War the two parties had cemented their position and subsequently influenced a range of policies developed to protect their duopoly.  For example, Bennett examines how the Federal Election Campaign Act of 1971, which was sold to the public as a nonpartisan act of good government reformism, actually reinforced the dominance of the two parties.  While focused primarily on the American experience, the book also considers the prevalence of two-party systems around the world (especially in emerging democracies) and the widespread contempt with which they are often viewed. Featuring incisive commentary on the 2008 election, a foreword by third-party iconoclast, Ralph Nader, and an afterword by Libertarian National Committee Chairman, William Redpath, the book considers the potential for achieving truly radical reform toward opening the field to vigorous, lively, contentious third-party candidacies. Not Invited to the Party is an important contribution to any discussion of the impact of party politics and the prospects for achieving effective representation.

James T. Bennett is Eminent Scholar and William P. Snavely Professor of Political Economy and Public Policy at George Mason University and Director of The John M. Olin Institute for Employment Practice and Policy. He is the author of numerous scholarly articles and over a dozen books, including From Pathology to Politics, Unhealthy Charities, and The Politics of American Feminism.

In 1780 John Adams presciently argued that the "division of the republic into two great parties . . . is to be dreaded as the greatest political evil."

Despite record turnouts for the 2008 presidential election, Adams’ fears have been realized. What would the Founding Fathers say now?

"There is much to ponder in this book. It makes one wonder just how the voters, given the ultimatum that only one of two candidates — if that — can win the elections — can ever escape their chattled desire to vote for "winners" while they — the people — keep losing."

From the Foreword by Ralph Nader

"A carefully researched and highly readable book that shows how federal, state, and local governments have enacted laws, regulations, and subsidies that discriminate in favor of the Democratic and Republican parties and virtually prohibit challenges by independent parties and candidates. The unfortunate result is limited choice in the political arena. This book is essential reading for anyone interested in political competition and public policy."

"Finally, a book that exposes the reality that U.S. elections are substantially less free and less meaningful than elections in most other developed nations. Professor Bennett, an economist, has given us a book that should have emerged long ago from the ranks of political scientists... [A]n interesting and very well-written study full of insights into the election process."

"James Bennett combines a detailed historical analysis of the rise of the two party system with the insights of the public choice school of economics to explain how the American people are ill-served by laws that limit their choices at the ballot box. Every American looking for ways to increase voter participation and open up the political process to all points of view should read this important book."